The world’s largest carbon capture plant is up and running near Reykjavik- the capital of Iceland. Now, the above statement may seem blunt and cryptic. This article serves to provide context into what carbon capture is, and why establishing this plant is a major milestone in the global fight against climate change.

What is carbon capture?

" Carbon Capture  and Storage (CCS) is a way of reducing carbon emissions, which could be key to helping to tackle  . global warming . It’s a three-step process, involving: capturing the carbon dioxide produced by power generation or industrial activity, such as steel or cement making; transporting it; and then storing it deep underground."

The Intergovernmental Panel on Climate Change ( IPCC ) highlighted that, if the world is to fulfill the ambitions of the Paris Agreement and limit future temperature increases to 1.5 degrees, we must do more than just increasing  efforts  to reduce  emissions . We also need to deploy technologies to remove carbon from the atmosphere.  CCS is one of these  technologies  and can therefore play an important role in tackling global warming.

How does DAC work?

Direct air capture ( DAC ) is a technological method that uses chemical reactions to capture carbon dioxide (CO₂) from the atmosphere. When air moves over these chemicals, they selectively react with and remove CO₂, allowing the other components of air to pass through. These chemicals can take the form of either liquid solvents or solid sorbents, which make up the two types of DAC systems in use today.

Liquid solvent systems pass air through chemical solutions (e.g. a hydroxide solution), which removes the CO₂ while returning the rest of the air to the environment.

Solid direct air capture  technology  makes use of solid sorbent filters that chemically bind with CO₂. When the filters are heated, they release the concentrated CO₂, which can be captured for storage or use.

Once the carbon dioxide is  captured  from the atmosphere, heat is typically applied to release it from the solvent or sorbent. Doing so regenerates the  solvent  or  sorbent  for another cycle of capture.

The captured  CO₂  can be injected underground for permanent storage in certain geologic formations.

Now that we have gained some context, let’s dive right into the crux of the article!

The world’s largest direct air carbon  capture  plant is located in  Hellisheidi  in southern Iceland. It is named Orca, a modification of the word Orka- which means ‘Energy’ in Icelandic.  Orca  is the first-of-its-kind plant that translates the vision of industrial-scale direct air capture and storage into reality.The plant was developed as a joint venture by Climeworks AG - a Swiss startup which specializes in direct air carbon capture and Carbonfix -an Icelandic company that specializes in storing the captured CO₂ safely underground by turning it into stone! 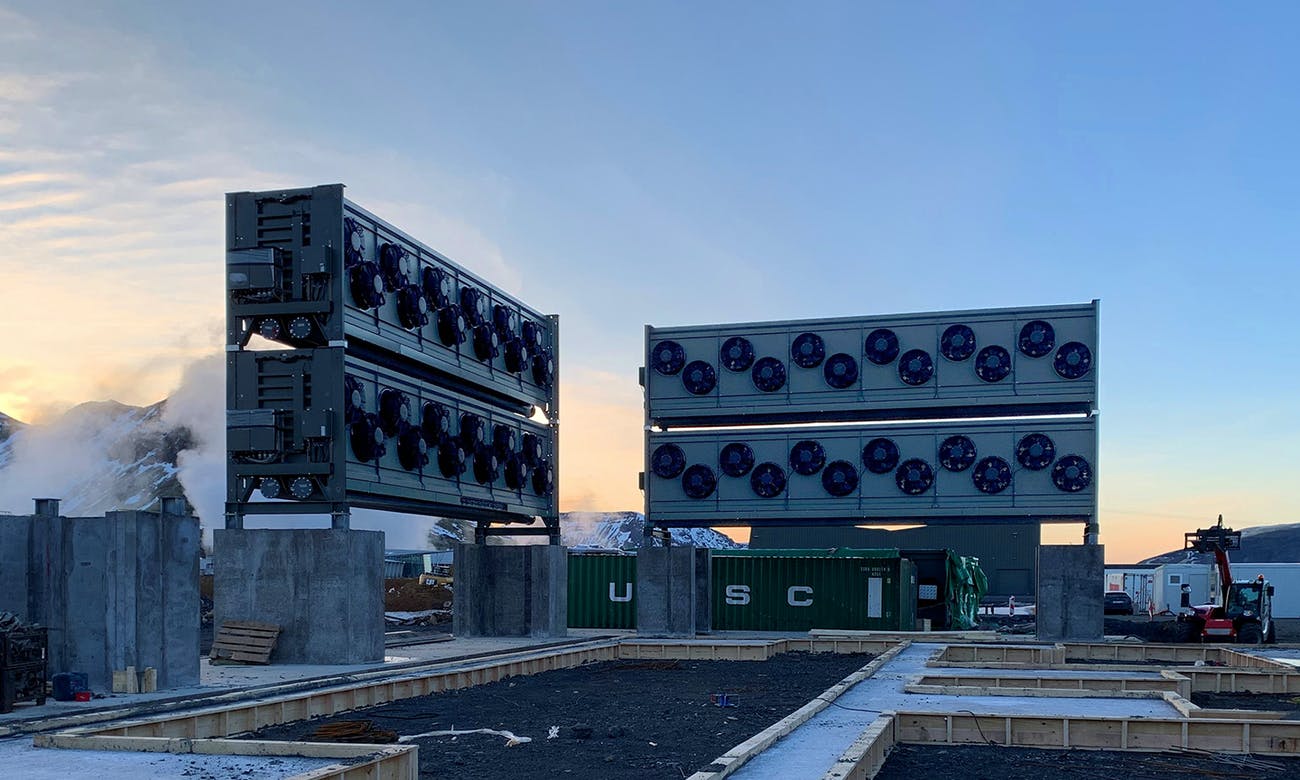 Orca has the capacity to remove 4,000  tonnes  of carbon dioxide from the atmosphere through direct air capture. This amount is roughly equivalent to the emissions from 870 cars.

Further, the plant is located near Icelandic energy company ON Power's geothermal power plant, hence it is entirely run on renewable,  geothermal  energy.

The Making of DAC system 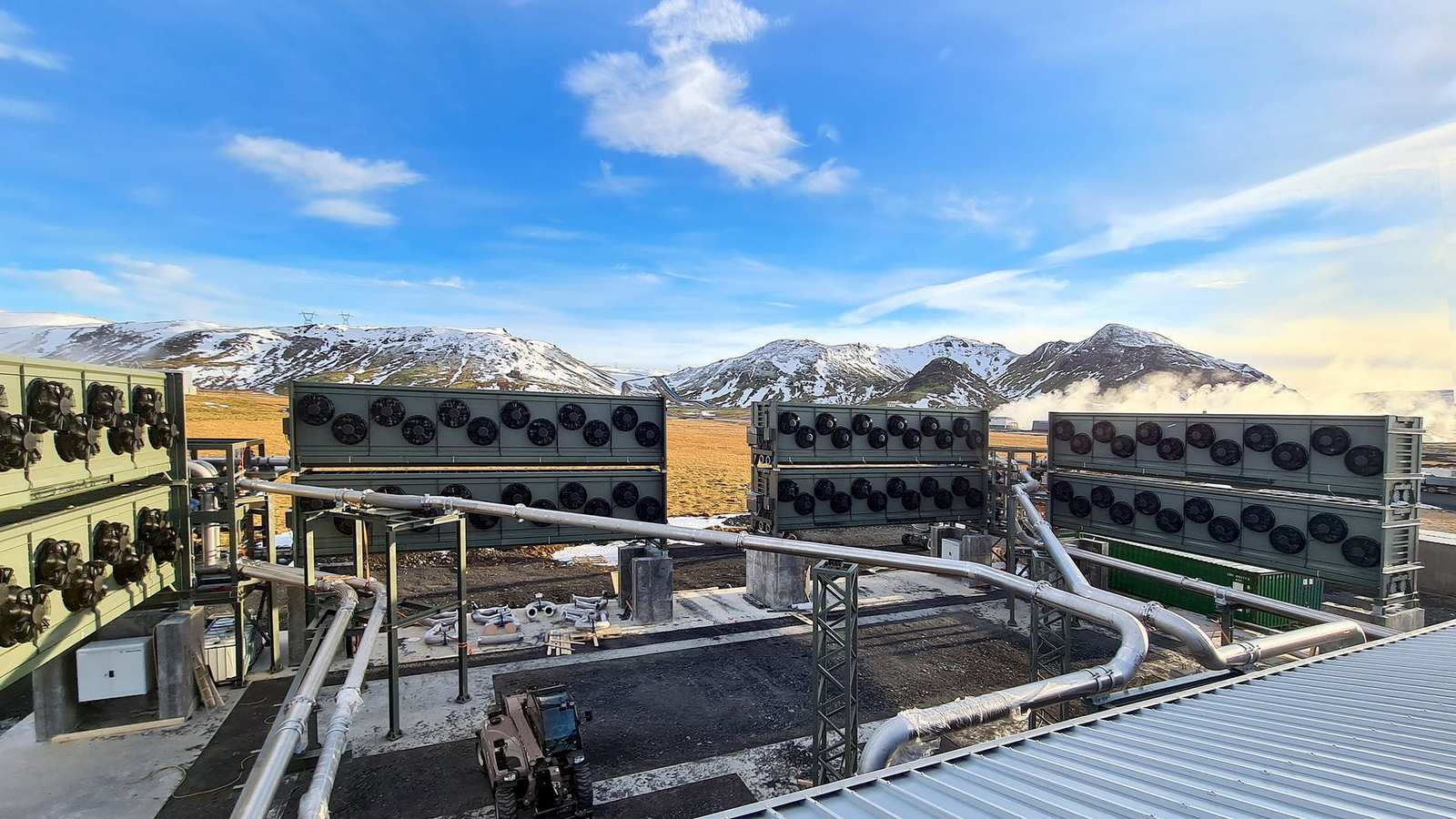 How does Orca perform direct air capture and storage?

The CO₂ thus collected undergoes natural mineralisation. The technology developed by  Carbfix  mimics storage of CO₂ in rocks- which occurs in nature. Naturally, CO₂ gets dissolved in water and interacts with reactive rock formations, such as basalts, to form stable minerals providing a permanent and safe  carbon sink .

The process developed by Carbfix captures and permanently removes CO₂. The technology provides a complete carbon capture and injection solution, where CO₂ dissolved in water is injected into the subsurface (underground).  This carbonated water reacts with rocks, specifically young, basaltic rocks underground.

Basaltic rocks are highly reactive and contain the elements needed for permanently immobilising CO₂(such as calcium, magnesium and iron) through the formation of carbonate minerals.

Over time, these elements combine with the dissolved CO₂ and form carbonates filling up the empty space (pores) within the rocks. The  basaltic  rocks are often fractured and porous, containing storage space for the mineralised CO₂. The carbonates thus formed are stable for thousands of years and can thus be considered permanently stored.

The construction of Orca single-handedly increases Earth's annual carbon capture capacity by 40 percent to 13,000  metric  tons. According to Climeworks, the plant will eventually expand to megaton removal capacity by the second part of this decade.

Benefits of direct air capture as a carbon removal option include its limited land and water footprint and the possibility of locating plants close to suitable storage or utilisation sites, eliminating the need for long-distance CO₂ transport.

Direct air capture is still a fledgling and costly technology, but developers hope to drive down prices by scaling up as more companies and consumers look to reduce their carbon footprint. Large scale implementation of direct air capture, as observed at Orca, will pave the way for a carbon neutral and eventually, a carbon negative future.